How To Install Android Apps On PC Windows and Mac 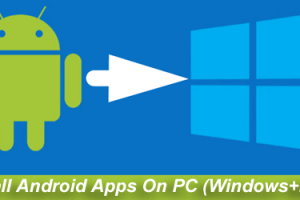 What does Android App mean?

How to use Android app on your PC

What is The BlueStacks App Player

BlueStacks is the most widespread Android emulators nowadays. It, however, links the gap between the desktop and the mobile ecosystems. BlueStacks also helps users operate their favorite Android apps and games from the comfort of their desktop or laptop. By using it, you can get the benefit of the great resources existing in the PCs or Macs. You will get the benefits of using a mouse and keyboard too.

BlueStacks was initiated in 2011. The technology enthusiasts considered it as the top android emulator existing today.  More than 130 million users are utilizing this app for running android apps on their PC and Mac computers. For Apple enthusiasts, there is also a Mac version.

With the BlueStacks App Player, click the Get More Apps button on your PC, then you can be capable of installing new Android apps. It has an excellent and easy to use User interface.

The Following are step by step guide for installing Android apps on PC.

You have to have a minimum of 2 GB of memory and also 4 GB of obtainable space on the hard drive and Direct X 9.0 or more installed to run BlueStacks.  If problems arise when using BlueStacks, it may be because you have not met the requirements of hardware.

You can use the BlueStacks App Player free of cost. The software will permit you to run Android applications on your Windows PC. You are required to sign-in with a Google account to use BlueStacks. If you do not have a google account, create one that you will require for signing up for one as you need for any Android device.